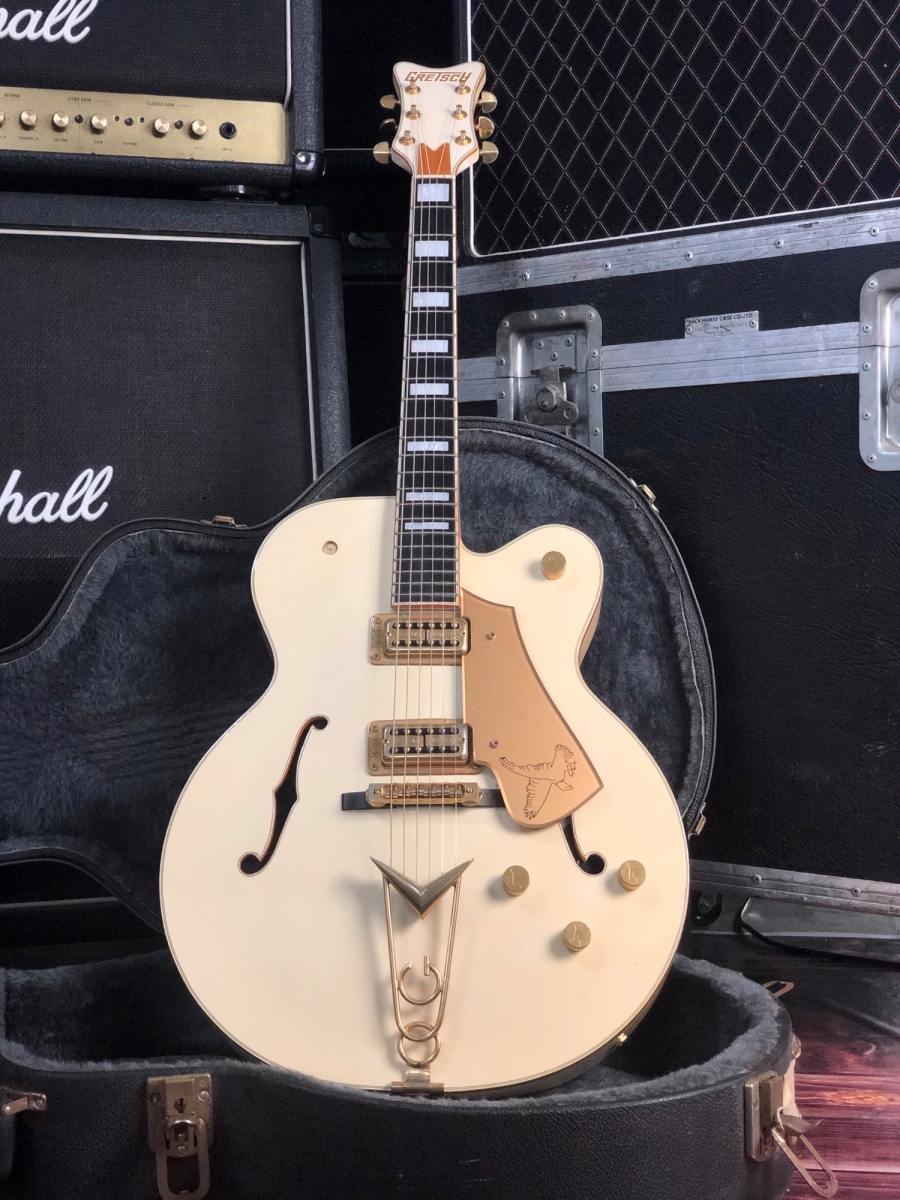 This September, Garidner Houlgate present an opportunity to acquire an iconic guitar, used and owned by arguably the biggest band in modern day rock music, that being Foo Fighters.

Owned by Foo Fighters guitarist Pat Smear during the late Nirvana and early Foo Fighters era, this Gretsch White Falcon was used by Dave Grohl in the video for one of the bands most recognisable hits, 'Monkey Wrench'. 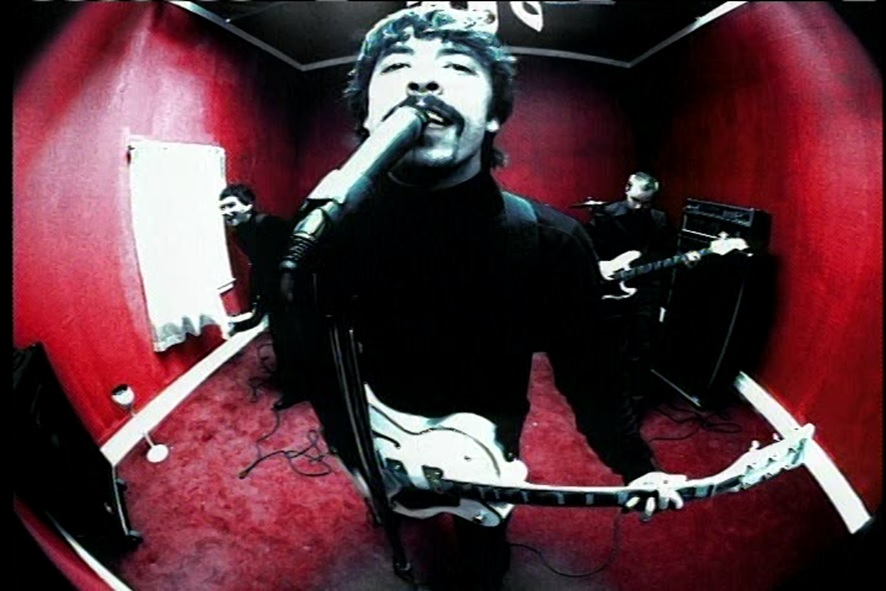 The guitar will be offered in our next quarterly specialist guitar auction on 7th & 8th September, alongside many other artist related and other collectable guitars and related equipment. Read on for the full lowdown on a guitar that is sure to be a fantastic investment opportunity....

Dave Grohl and Pat Smear (Foo Fighters) - Pat Smear's personal 1990 Gretsch White Falcon hollow body electric guitar, made in Japan, ser. no. 906593-39, used by Pat Smear on 'The Colour and The Shape' album recordings and on various Foo Fighters tours and used by Dave Grohl in the video for the bands 1997 single 'Monkey Wrench', the body in Classic White Falcon finish with orange sparkle binding, ebony fretboard, modified Cadillac tailpiece, modified switching and the body with pillow filling interior, within original hard case bearing white tape, one inscribed 'Stay on the bus', the other 'Falcon'.

* Sold with an eBay listing from June 2005 advertising the guitar for sale, stating that the guitar was purchased by the seller in 2003 from the highly reputable musical instrument dealer 'Don Breeze' from San Diego. Don Breeze purchased the guitar from Earnie Bailey, Pat Smear's guitar tech from his days with Nirvana and Foo Fighters and was responsible for the modifications which include fitting an original 1950s Gretsch Cadillac tailpiece, found by Pat in a junk shop; putting a pillow filling inside the guitar to stop it from feeding back at high volume with the F holes blanked out with black velvet; fitting a rotary tone selector switch in place of the master volume knob and removing the original selector switch to suit Pat's playing style, with the original switch and pot retained.

Incuded is a statement of provenance from Pat Smear stating 'I had to have a White Falcon after seeing the great Matthew Ashman use one with Bow Wow Wow in 1981. The guitar looked amazing but the early ones were super rare and expensive and the 70s models had all that extra crap like dampeners and stereo switches. When the 90s reissues came out I could finally get one without worrying about banging around some overpriced museum piece on the road... or so I thought. It instantly became one of my favourites, getting special treatment (note the 'Stays on the bus' sticker on the case) and was usually the one to pull out to play in hotel rooms and show off to visiting friends. Earnie made modifications while on tour, eventually creating my ultimate Falcon (as seen in the 'Monkey Wrench' video). I played this guitar on several Foo Fighters tours and on 'The Colour and The Shape' album. It was also used by Harlow on their 'Harlow Land' album. Signed 'Enjoy! Pat Smear, 2002'. 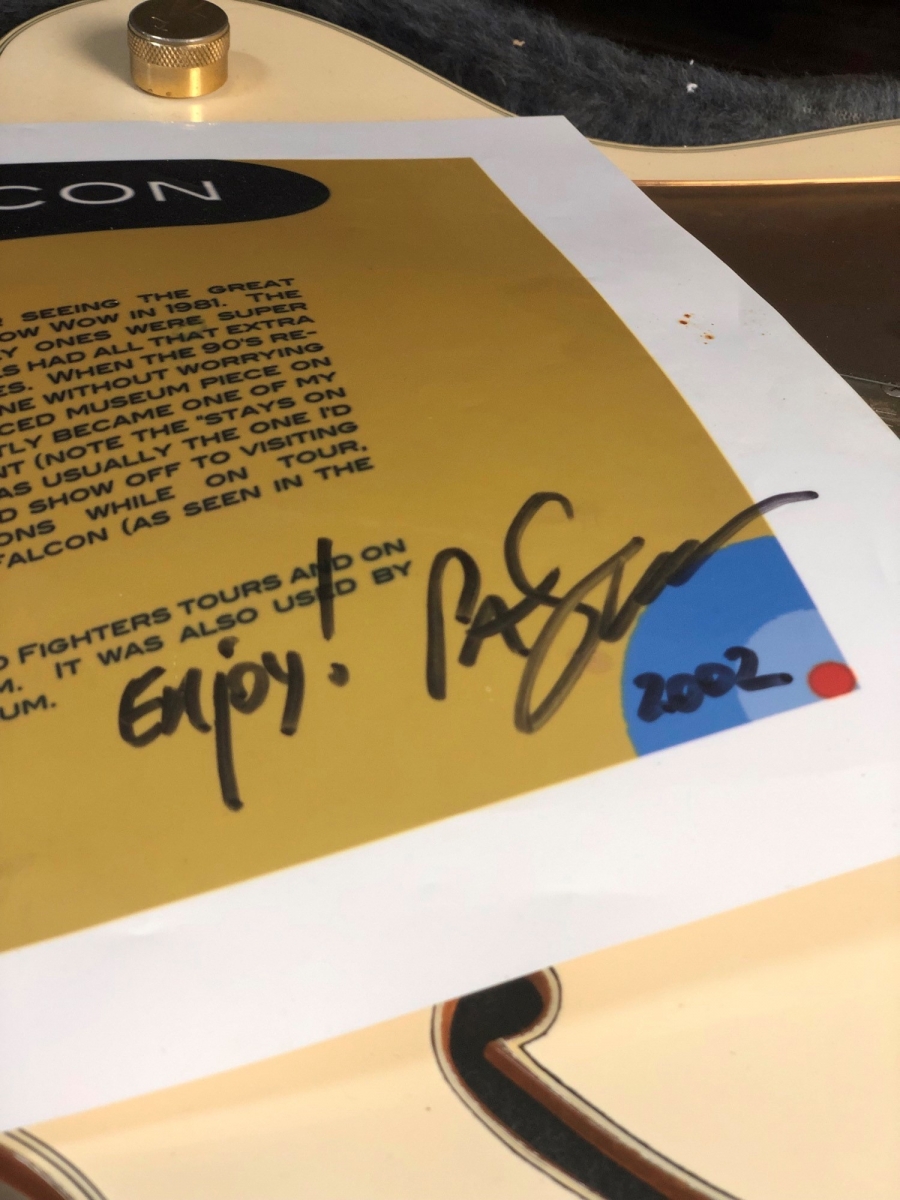 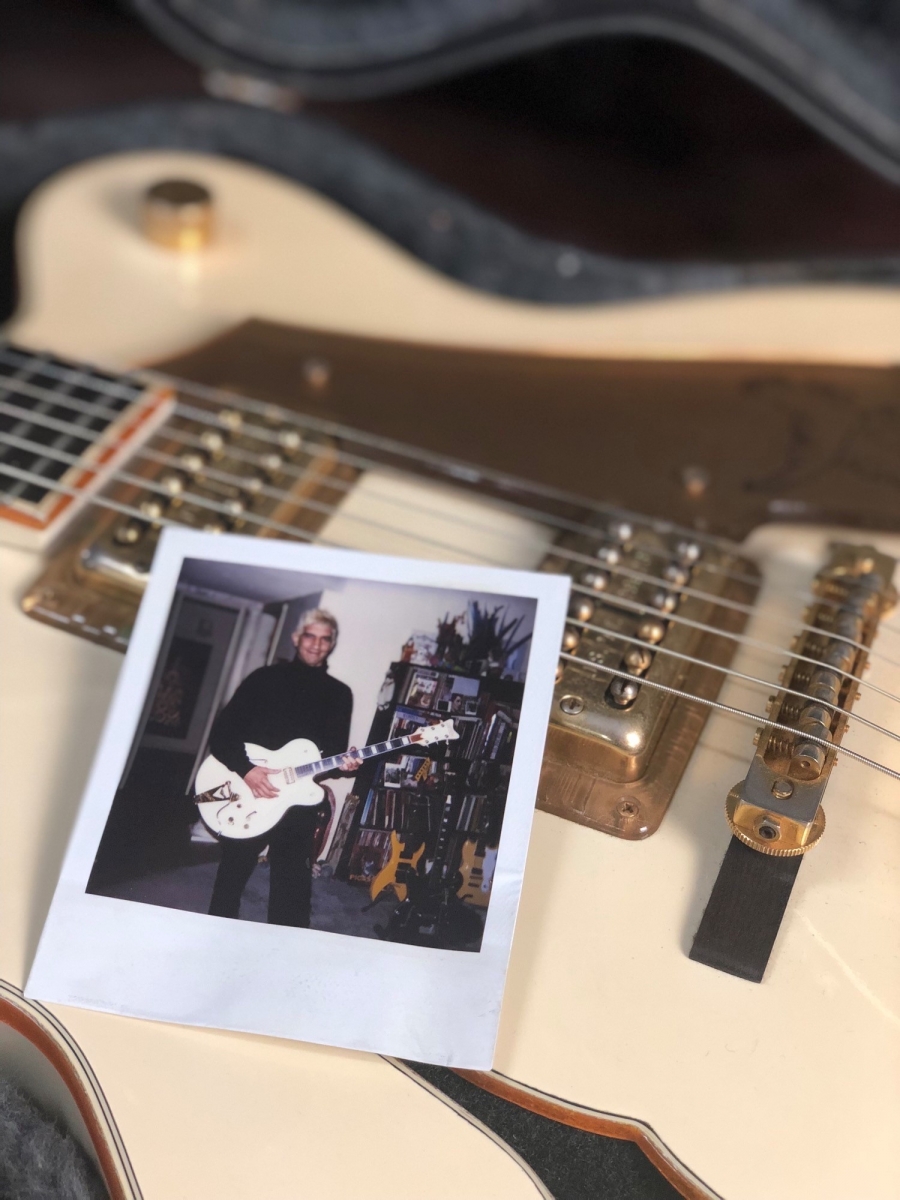 Pat Smear is an American musician, best known for being lead guitarist and cofounder of Los Angeles bass punk band 'The Germs' and being rhythm guitarist for Nirvana and Foo Fighters

'The Colour and The Shape' is the second studio album by Foo Fighters, released on 20th May 1997 and the album that marked the official debut of Foo Fighters as a band, following the 1995 debut album which was primarily recorded by Dave Grohl as a demo. After this debut album became an international success, Dave Grohl recruited guitarist Pat Smear, bassist Nate Mendel and drummer William Goldsmith to form the band's full line-up, with the album preproduction starting in autumn 1996, produced by Gil Norton. The album singles 'Monkey Wrench', 'Everlong' and 'My Hero' peaked within the top ten of the US rock charts and the album charted at number ten on the Billboard 200, as well as having international commercial success, peaking at number three in the UK. The album is regarded by many to be a significant American rock release and continues to be viewed as a seminal modern rock album. 'The Colour and The Shape' remains the Foo Fighters' biggest-selling album, having sold more than two million copies.

'Monkey Wrench' is the lead single from the Foo Fighters' second album 'The Colour and The Shape', peaking at number nine on the US Billboard mainstream rock chart and at number twelve in the UK singles chart. It is widely regarded as one of the Foo Fighters' best and most recognisable songs. The iconic music video features Dave Grohl, Pat Smear and Nate Mendel, and was the first music video from the band to feature Taylor Hawkins on drums. Dave Grohl can be seen throughout the entire video playing the white Falcon with the current modifications in place.