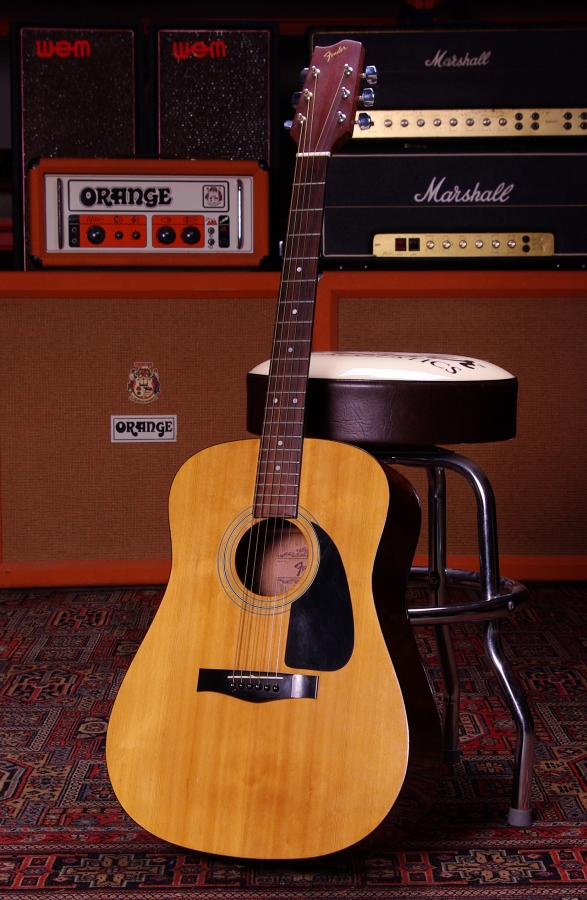 Following the success of the Paisley Park Cloud guitar, sold in our last sale of 2020, we are delighted to announce the sale of a Fender guitar used by Prince as the main acoustic for the recording of the hit album 'Diamonds and Pearls'. According to Sylvia Massy, the official engineer for the 'Diamonds and Pearls' sessions, the Fender Gemini II, serial no. 000000035, was chosen by Prince over a selection of high-end rental acoustics for its dry, woody, percussive qualities. The guitar was used throughout the entire album but is particularly prominent on the track 'Walk Don't Walk'.

The vendors, who are huge Prince fans themselves, acquired the guitar directly from Sylvia Massy and hope it will pass onto another fan of the artist who will enjoy the acoustic as much as they have.

Very few artists rival Prince, an artist that needs little introduction, in terms of commercial appeal and being one of greatest and most successful musicians of his generation. Also considered a guitar virtuoso, the guitar department at Gardiner Houlgate are thrilled to offer an instrument that has been used by one of THE guitar greats.

The full catalogue description and provenance can be found below. For further information, bidding and press enquiries, please contact Luke Hobbs by telephone on +44 (0)1225 812912 or by email - luke.hobbs@gardinerhoulgate.co.uk

Further listings can be viewed in our catalogue preview HERE

*Sold on behalf of the vendors, who acquired the guitar directly from renowned American producer Sylvia Massy, who was the official sound engineer on the 'Diamonds and Pearls' album.

The vendors have provided a declaration of provenance regarding the acquisition of the guitar, stating:

“We acquired this very special guitar directly from Sylvia Massy, the official sound engineer for that (‘Diamonds and Pearls’) album. Sylvia worked very closely with Prince for three years and was witness to his many performances with this guitar. Sylvia is one of the most well-known engineers in the industry and was even offered a permanent role to continue to work with Prince at Paisley Park. Sylvia to this day continues to work with some of the biggest names in the music industry.

This guitar played a significant part in the recording of the Diamonds and Pearls album. It was chosen personally by Prince above many other high end rental guitars at his disposal. When listening to the album, you will hear this very guitar being played by, in our opinion, one of the best performers and musicians that ever lived. The guitar was used on several songs on the album and it is particularly prominent on the track ‘Walk Don’t Walk’. It is also listed on GuitarCloud website under ‘in the studio’ as the acoustic option on the album.

As huge Prince fans ourselves, we loved owning this amazing piece of Prince history and we hope that you enjoy displaying it as much as we have. In particular, one of our favorite aspects of the guitar is the clearly visible strum marks on the pick guard, we found these amazing and overwhelming to look at, as they are a clear visual imprint of music history that Prince left on this guitar. We would listen to the album and know that what we could hear was Prince leaving those very marks that we had in front of our eyes.

This guitar has a specific famous Prince story behind it which can be found in several online articles and interviews and even YouTube videos. You just need to Google Prince Fender Gemini II and you will see for yourself the significance of the guitar. We hope you enjoy owning it as much as we did.”

This signed declaration of provenance is included in the sale. 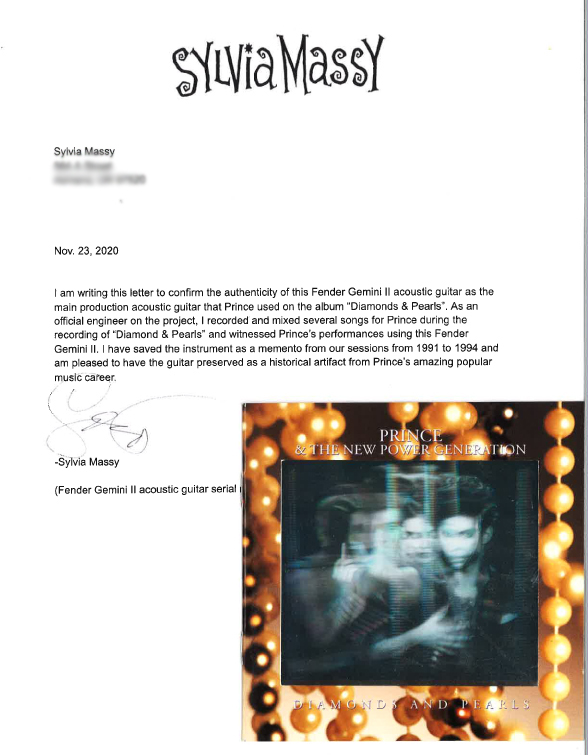 A signed statement of provenance from Sylvia Massy, on headed paper dated November 23 2020 accompanies the guitar declaring: 'I am writing this letter to confirm the authenticity of this Fender Gemini II acoustic guitar as the main production acoustic that Prince used on the album 'Diamonds and Pearls'.  As an official engineer on the project, I recorded and mixed several songs during the recording of 'Diamonds and Pearls' and witnessed Prince's performances using this Fender Gemini II.  I have saved the instrument as a memento from our sessions from 1991 to 1994 and am pleased to have the guitar preserved as a historical artifact from Prince's amazing popular musical career.  Also included is a copy of the album in CD format.'

Sylvia Massy is an acclaimed American producer, mixer and engineer having worked with artists such as Prince, Tool, System of a Down, Johnny Cash and The Red Hot Chilli Peppers. The ‘unconventional producer’ was even offered a permanent job at Paisley Park Studios, which she politely declined. Sylvia reflects on her time with Prince and how he came to use the Fender Gemini II in a Gear Stories article at mixonline.com (https://www.mixonline.com/recording/gear-stories-sylvia-massy-prince-and-gemini-ii-366174)

Massy explains: “In anticipation of engineering a particular Prince date, I once brought extra guitars to the studio — one of them being my cheap little Fender Gemini II acoustic. I was a bit embarrassed for it against the row of polished, tuned and beautifully tweaked rental guitars on the session, so I stuck my Gemini II in the corner out of sight. It was untuned, had old strings and no stand. I knew that whatever instrument Prince reached for had to be tuned, plugged in and ready to record, or he was outta there.

It would figure that Prince pulled out that damn Gemini II. I was horrified. I imagined him throwing it down on the floor and storming out of the studio because it was not properly prepared for him. Instead, I was shocked to witness Prince playing flawless rhythm and even solo parts, bending the individual strings to the right pitch as he fretted chords effortlessly. He compensated with his fingers to bring the instrument in tune and the guitar sang like it had a fresh set of strings.

That acoustic sounded great on the track “Walk Don’t Walk.” It did just what it’s best for — keeping an even percussive rhythm throughout the song. Prince used the Gemini II on several other songs, and at the end of the sessions he casually directed his crew to pack the guitar up into one of his road cases. I don’t think he realized it was mine and assumed the rental company would just charge him for it. I noticed what Prince was doing, and said, “Excuse me, you can buy one of your own for $200; they aren’t that expensive.” He smiled at me, and said, “But I want this one.”

The dreadnought-shaped Fender Gemini II six-string acoustic is really nothing special, or so I thought. Prince had a thing for that guitar. You’ll hear it on the Diamonds and Pearls album. Originally manufactured in Korea in the late ’80s, the guitar features a mahogany back and spruce top. It’s a budget guitar — dry sounding, very woody. Not sparkling, not shimmering, more like a chugging. Just a very plain acoustic. I generally use it to fill out rhythm tracks in rock songs, more as a percussion instrument, like a shaker.

Acoustic guitars can play multiple roles in album recording, either as a melodic voice or as a percussive instrument. It is not always necessary to have the deepest, most resonant tone in an acoustic guitar; in fact, for percussive needs, you may want the guitar to sound almost like a washboard! An Underrated Studio Essential.

No, you can’t have my guitar! A stuffed chair and a low-cost acoustic for Prince.

At the end of 1992 I had a Billboard Top 25 single with Green Jello’s “Three Little Pigs.” I had also been asked to produce a new band called Tool. At the same time, Prince offered me a job at his Paisley Park Studios in Minnesota. It was a great opportunity, but I decided to remain in Los Angeles. After declining his job offer, I never heard from Prince again. No, I never sold him that guitar and most of my clients today who use the Fender Gemini II could never imagine its stressful, difficult and incredibly magical heritage!”….. 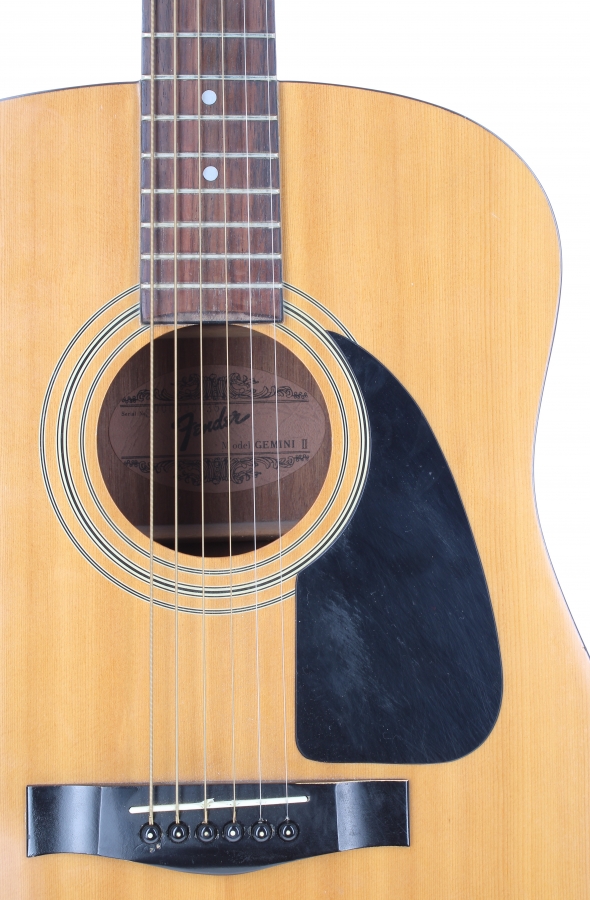 The Guitar appears on guitarcloud.org, a website dedicated to Prince’s equipment archive. The Fender Gemini is listed as the acoustic instrument of choice. (http://www.guitarcloud.org/era/diamonds-and-pearls)

'Diamonds and Pearls' is the thirteenth studio album by American artist Prince and the first with his backing band 'The New Power Generation'. Released on 1st October 1991 by Paisley Park Records and Warner Brothers Records, the album produced several singles including 'Gett Off', 'Cream', 'Money Don't Matter 2 Night', 'Insatiable' and the title track 'Diamonds and Pearls'.  The album had worldwide success, reaching number one on the US Billboard R&B albums chart, number three on the US Billboard 200 chart, number two in the UK albums chart and number one in the Australian albums chart as well as achieving multi-platinum certification across the globe.

For further articles and resources relating to the guitar’s provenance, please visit: